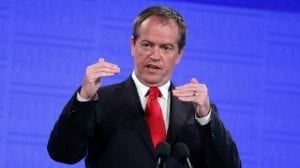 Federal opposition leader Bill Shorten has made it no secret he will look to Australia’s superannuation industry to unlock billions in capital investment for key infrastructure projects.

Unveiling Labor’s infrastructure plans at a Queensland Media Club event last night, Shorten said the predicted $4 trillion in super savings by 2025 should be put to “work on nation-building.”

The plan is to have Infrastructure Australia backed by a $10 billion funding facility that deploys equity to jumpstart new projects. In turn Infrastructure Australia “would transfer its equity or debt interests to long term investors such as super funds to maximise the return to the Commonwealth and so that capital can be recommitted to new projects.”

It is a plan that federal treasurer Scott Morrison said “has some merit.” In an interview on Melbourne radio yesterday, Morrison said productive infrastructure was one of the key things needed to grow the economy.

“Now, these are interesting ideas, any idea though is only ever going to be as good as its implementation. So, while I think there is some merit in what he [Shorten] is putting forward at the end of the day what has to happen is you have got to find projects that actually can pay a return. I mean it’s not grandfathering, they’re not just going to hand it out and give it to the states to build infrastructure,” Morrison said.

Shorten said in his speech that Labor will elevate Infrastructure Australia to an active participant in the infrastructure market, “mobilising private sector finance, Australia’s superannuation industry and international investors to bring a national pipeline of investment online.”

“We have a deep pool of domestic capital in superannuation as well as significant global investors that are searching for stable and reliable assets to invest funds over extended periods,” Shorten said.

Infrastructure Australia has estimated that the economic cost of underinvestment is projected to reach $53 billion a year by 2031.